graduating from the Wharton School of Business—expresses himself politically. It is also more generous than other analyses of Trump’s campaign rhetoric: Jack Shafer, of Politico, conducted his own examination of Trump’s extemporaneous remarks, and concluded that they were at a fourth- or even third-grade reading level.

But it has certainly not been the only occasion upon which observers have attempted to make an educated guess about which school grade the Republican nominee should transfer into. In March, Stanley Druckenmiller, the billionaire founder of Duquesne Capital, told CNBC that Trump has a “kindergartner . . . view of economics.” Last month, President Obama suggested that Trump—who, on the evidence of his debate performances, seems almost constitutionally unable to look at a black person without spiralling into spurious fearmongering about inner-city blight—knew less about the history of the African-American experience than the average third grader. Nicholas Kristof, in the Times, tagged Trump as a “seventh-grade bully,” then apologized to the nation’s thirteen-year-old boys for insulting them.

Other candidates might blanch at regularly having their behavior compared to that of a grade-schooler; Trump can hardly do so, having bragged to one of his recent biographers, Michael D’Antonio, that his temperament hasn’t changed since he was in first grade. Meanwhile, the nation’s teachers are struggling with how their civics classes might tackle this campaign, the most uncivil in recent American political history. As one seventh grader in Eau Claire, Wisconsin, recently told the Times, “If you repeat some stuff that Trump says, you could get sent to the principal’s office. Maybe even expelled.”

The campaign in its closing weeks has, for educators and parents, become one prolonged, unsavory teachable moment, with the acquisition of new vocabulary words (“misogyny,” “unconsensual” ) and the loss of others (“pussy,” in its prelapsarian, feline usage). But it has also been remarkably devoid of any real discussion of educational issues. In the three Presidential debates, not a single question was addressed to the candidates about their views on education. And, apart from Hillary Clinton’s fleeting mentions of affordable child care and debt-free college tuition, neither candidate sought to raise the issue. Fifty million children are enrolled in public schools in the U.S., yet in none of the debates was there any discussion of the areas of concern that have occupied educators and parents in recent years: the Common Core, teacher evaluation, standardized testing, or the effective segregation of schools in many parts of the country, including in New York City.

Unsurprisingly, the candidates differ as much on their approach to education as they do on virtually every other issue, as the Washington Post outlined in a helpful analysis earlier this month. In September, Donald Trump delivered a speech at the Cleveland Arts and Sciences Academy, a charter school in Cleveland, Ohio, in which he offered his vision, though not before delivering an extended peroration about the perfidies of his Democratic opponent—e-mail, Iraq, the Clinton Foundation—unrelated to educational concerns. When he did get around to his own proposals, he spoke of expanding existing school-choice programs, promising that in a Trump Administration twenty billion dollars of federal education funds would be reassigned to provide a block grant enabling the eleven million students living in poverty to attend the private or public school of their parents’ choice. “Competition always does it,” he said. “The weak fall out and the strong get better. It is an amazing thing.” He advocated merit pay for teachers, stated his opposition to Common Core, and spoke in favor of charter schools and against teachers’ unions. “It’s time for our country to start thinking big and correct once again,” he declared, thereby failing to meet the second-grade Common Core standard 2.1.E. (“Use adjectives and adverbs, and choose between them depending on what is to be modified.”)

Clinton has a long-standing commitment to educational issues; as First Lady of Arkansas, in 1983, she headed a committee to improve academic achievement among the state’s public-school students. She has declared the intention of “preparing, supporting, and paying every child’s teacher as if the future of our country is in their hands,” and has given some suggestions as to how that estimable goal would be accomplished. She has said that she will provide funding to increase the teaching of computer science; she has also pledged to fund the rebuilding of school infrastructure, and to address the so-called school-to-prison pipeline, whereby African-American and minority students are disproportionately subject to overly punitive disciplinary policies, often involving law enforcement, within the schools they attend; she would fund interventions in social and emotional learning, to the tune of two billion dollars.

Education is hardly the only issue that has been eclipsed by more sordid concerns in the current campaign. It is perhaps not even the most important, existentially speaking: no questions about climate change were posed at any of the debates, a startling oversight. The next President, whoever she is, will in any case have a smaller role to play in determining education policy than did her predecessor: the bipartisan Every Child Succeeds Act, which reduces the role of federal government in decisions related to schools, and grants larger autonomy to the states, was signed into law by President Obama almost a year ago. 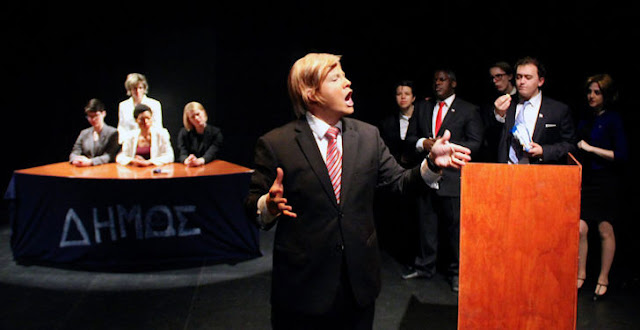 But it would have been illuminating had the candidates been prodded, even a little, to define their perspectives on the value of education. In these last weeks of the campaign, Trump has taken to speaking of his efforts to become the leader of the free world—travelling the country, talking to voters—as a journey of personal growth: “This has been such an incredible education for me,” he told Chris Wallace, in the final debate. For the rest of us, however, it has been a singularly unedifying spectacle, and for none is this truer than for those not yet old enough to vote.